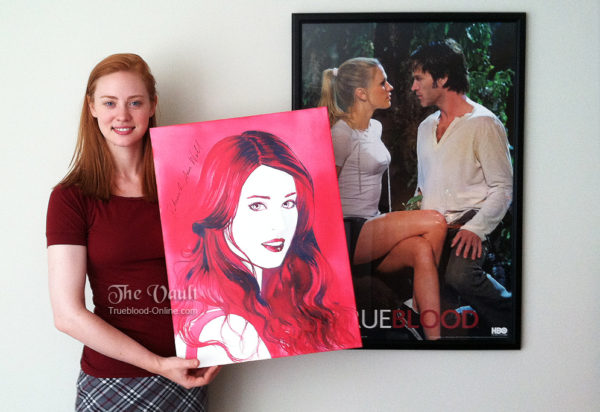 A new auction over at trueblood-online.com, was launched yesterday to benefit Choroideremia. They decided to say goodbye to True Blood Season 5 with this very special season finale auction by artist Steve Cleff.

Earlier this year they were contacted by Philadelphia based artist Steve Cleff, a big fan of True Blood and Deborah Ann Woll. He offered to paint Deborah’s portrait in support of the Choroideremia Research Foundation.

Steve Cleff is a portrait artist who specializes in watercolors, he has a BFA in Illustration from Syracuse University and his work has been exhibited in Philadelphia, New York, and Honolulu. He lives near Philadelphia, PA with his wife Tricia and their son Patrick. You can see his work at http://www.fluidbeauty.com.

To be a positive role model for his son, Steve looks for worthy causes to support by donating portraits of entertainers. Inspired by the kind spirit and beauty of Deborah Ann Woll and the heroic efforts of EJ Scott to raise money for a cure for Choroidermia, Steve asked the Vault if he could donate a portrait of Deborah to help contribute.

Deborah Ann Woll posed with the painting and did a short video for them. Below is Deborah Ann who shows you the painting herself. The following video was shot at the Vault HQ.

Visit the auction listing and place your bid: http://r.ebay.com/Vy6G9I

For more information about the CRF visit curechm.org