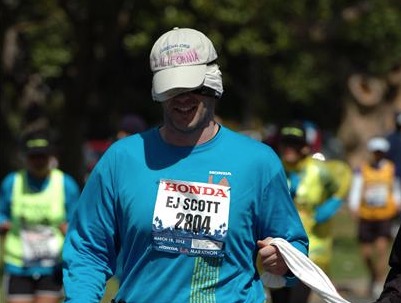 In their countdown to SDCC True Blood Comics has interviewed EJ about running the 12 marathons in 2012 that he is in the process of completing this year to raise money for charity.

Below is a portion of their interview:

TBC: How do you explain to people who don’t know what Choroideremia is?
EJ: I explain that it’s an eye disease that causes blindness, more specifically it’s a hereditary degenerative eye disease that attacks the peripheral vision first and slowly erodes it over time until the central vision is gone too.

TBC: Are their lots of people who are affected by it? When were you diagnosed?
EJ: I have heard that 1 in 50,000 have it. I and others believe that may be an underestimation because many don’t know they have it, many don’t talk about it if they do know they have it and others are misdiagnosed. All of which have happened to me at some point.

I was diagnosed in March 2003 along with the rest of my family. I was 27 when I was diagnosed, my brother was 16. My mother, sister, aunt are all carriers. I have a 7-year-old nephew that tested positive. I had a grandfather that went blind from it. My 3-year-old nephew hasn’t been tested yet.

TBC: Congratulations on your success with partaking in marathons this year! What made you decide to run blindfolded marathons?
EJ: If I want to run outside I HAVE to runblindfolded, so it wasn’t much of a choice there. The UV rays from the sun will make me go blind faster. I’ve been doing different types of fundraising since being diagnosed. In 2009 I weighed myself and noticed I was very overweight. I lost the weight while getting sponsorship from friends, family and strangers and lost 70 lbs, I wanted to keep the weight off and continue to be active and raise money for the foundation so I decided to start training for the Chicago marathon. Knowing I’d have to be blindfolded for it. I have guides while I run. I was able to get some publicity for the Chicago race and afterwards I thought if I could do 12 maybe I could get 12 times the publicity. Thus began 12 in 12 in 12.

EJ is giving True Blood fans the chance to win an awesome True Blood Prize! The Alexander Skarsgard cardboard stand-up from the 2010 SDCC Panel that he did not attend. Read more about it and how to donate after the interview!

TBC: Do you read comic books?
EJ: I do. I love comics! I’m more of a collector than reader because I can’t keep up with all my favorite titles. I read what I can when I can. There are always comics next to my bed.  When I was younger I went to art school in the hopes of being a comic book illustrator someday, then I changed directions and went into acting. now I run marathons. Life’s a funny thing.

TBC: What are some of your favorites?
EJ: Batman is my all time favorite character and some of the writing and stories have been amazing. I love Batman and his rogues gallery of bad guys and villains. Some of the best villains of all time are in Batman comics.

I’m an X-Men fan, anything Brian Michael Bendis writes I’ll love. I had stopped collecting and reading for a bunch of years then someone gave me some comics and I read a few (Avengers Disassembled and Alias)… and that was it, I was back to collecting and reading. Spider-Man, I like some of the new 52 in DC (Aquaman, Animal Man, Swamp Thing, Bat wing… many more). HULK!! I think Hulk is a very underrated character. Hulk is in my top 3 favorite characters ever, just behind Wolverine.

Read the rest of EJ’s interview by going to: truebloodcomics.com