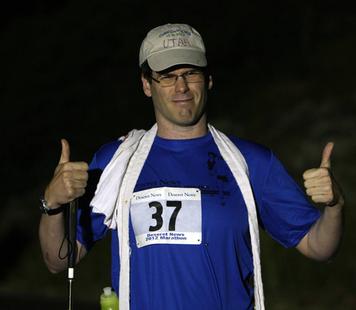 EJ Scott was interviewed by Deseret News after his Marathon in Utah which he ran in July.

He is scheduled to run his next 9th marathon on September 15 at the Air Force Base Race in Dayton, Ohio!

Below is the interview with EJ.

“I was never really active,” the Los Angeles resident said. “I was a couch potato. I smoked cigarettes for 15 years.”

His poor choices began to take a toll on his health. At his heaviest, he weight 267 pounds.

In 2003, the 36 year old was diagnosed with choroideremia, a rare genetic retinal degenerative disease that slowly deteriorates a person’s eyesight. When he was diagnosed, he had 70 percent of his eyesight left.

Today, he has about 10 percent. Now legally blind, he acknowledges that no one would blame him for being a couch potato now.

The irony is that as Scott was losing his eyesight, he found freedom from bad habits. First, he quit smoking seven years ago. Then five years ago he began to slowly change his diet.

“I just looked at the scale and I was so depressed when I looked at it, I knew I had to change,” he said. “I’d eaten poorly for over 30 years. And it’s still a challenge (to make healthy choices) every day.”

He began exercising because it accelerated his weight loss, and between eating better and jogging, he lost 70 pounds.

“It makes me feel good running and exercising,” he said.

In fact, it made him feel so good, he decided he wanted to try and run every runner’s dream — a marathon. But how would a man who couldn’t see navigate 26.2 miles of unfamiliar territory?

Complicating matters is the fact that UV rays are incredibly detrimental to his eyesight, but not even that could stop him.

“I run on a treadmill because UV rays are so damaging,” he said. “So I decided to do the race blindfolded.”

Scott covered his eyes with a blindfold and found a guide runner willing to lead him by allowing him to hold onto a tether between the two of them. The guide runner tells him about the terrain, and he sets the pace.

“I had never run a marathon without a blindfold,” he said. “They’re all scary. I hardly get any sleep the nights before because I’m so anxious. Everything about each race is new.”

He admits he’s fallen, but he’s never been seriously injured. It was after his first marathon that Scott decided he didn’t want to just run for his own health.

“I decided to run to try and raise money for research and a cure for choroideremia,” he said. He has a brother and a nephew who have also been diagnosed with the hereditary disease.

He said learning that you will lose your eyesight is a devastating moment. He spent more than a year in denial before finally deciding there were better ways to handle his pain and anger. He’s making a movie about his brother-in-law’s ride across the country for curechm.org, the same organization for which Scott is raising money by tackling what would be a difficult goal for any runner — 12 marathons in 12 months.

The Deseret News marathon in Utah was his seventh of the 12, and he was nervous about the amount of descents in the race. On his blog at www.ejcurechm.blogspot.com (which is also where he takes donations), he chronicled his experience in the marathon. He said he felt like quitting halfway through, and then at mile 25, he broke down crying. His goal was five and a half hours, but it took him six hours, three minutes and 44 seconds. It wasn’t just the physical exhaustion; it was the thought of slowly going blind, and of knowing that his brother and nephew would suffer in the same way.

He cried afterward as he explained to a woman making a documentary about him how difficult the whole experience was.

“Not just the race or marathons, but going blind,” he wrote, “trying to bring attention to something most (people) don’t want to pay attention to.“