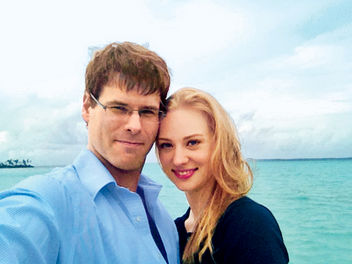 In an interview with Glamour Magazine, Deborah Ann Woll and EJ Scott talk about the struggle they face against a disease that’s slowly stealing EJ’s sight.

Deborah Ann Woll, met and fell in love with her boyfriend, EJ Scott when they hooked up on Match.com.  Shortly thereafter Deb landed the role of Jessica Hamby on True Blood and her career took off.  You’d think this is a total fairy tale, except for one six-syllable word: Choroideremia, or CHM, a rare genetic disease that causes blindness—and has almost obliterated Scott’s vision already. Rough? Absolutely. Depressing? These two say no. In a portion of the conversation the two had with Glamour Magazine, read about how they share how they’re facing the future, together.

Deborah Ann: I’m shy, and I’d always had a hard time meeting boys. I had a serious boyfriend in high school, but Hollywood, where it’s all about being “cool,” terrifies me! When I opened my Match account, I’d done a few guest spots but wasn’t on True Blood yet, and I wanted to find someone grounded.

E.J.: I kept clicking through her photos, and there was one that had this great big smile. I’m a big smile guy. Her profile said she liked Mystery Science Theater 3000 [a show canceled in 1999]. She was so pretty yet so nerdy! I just had a feeling about her, so I really pressured her into meeting.

Deborah Ann: His profile went into the choroideremia—

E.J.: I didn’t have it on there at first, but it was weird to go on a date and then tell somebody. I’m light sensitive [CHM harmsthe eyes’ photoreceptors, so sun or flashbulbs are temporarily blinding]. I’d have to ask, “What if we met in a dark place?” And that doesn’t sound good! [Laughs.]

Deborah Ann: His honesty was part of why I was interested in him. I definitely googled the disease, and I checked out the links about it in his profile, but it didn’t scare me. On our first date we talked and talked, but we didn’t get into his CHM.

E.J.: I liked her the second I saw her. It was dark, and even then my eyes weren’t great in the dark, but I could see her smiling.

Deborah Ann: I connected with him right away—I felt like I could be myself. On our next date we went to a basketball game. He couldn’t navigate the crowd, so he asked if he could hold my hand. It was sweet. A few months later, his CHM started to sink in for me. We were at a bar, and he knocked a glass off a table. I remember thinking, Wow, he really can’t see that. But I never wanted to step away. Then after about four months, I was upset and crying, and it was really the first time I got emotional in front of him. And suddenly he goes, “You know I love you!” I was like, “What?!” The moment I feared he was falling out of like with me was the moment he told me he loved me.

E.J.: I meant it. I was about to move to Chicago [to study at Second City improv school]. I didn’t know—do I not move? Do we break up?

Deborah Ann: We decided to break up like rational adults; I drove him out there, and that was going to be it. But I saw him a few weeks later and said, “I can’t do it! I want to be together!”

E.J.: I’d been diagnosed at age 27, after we learned my younger brother had CHM. But it was when I moved to Chicago that I gave up driving.

Deborah Ann: He was declared legally blind that year too, and started using a cane. That was a positive change, for me. I’d been so scared a taxi was going to dart in front of him and, because he didn’t have any peripheral vision, he’d get hit. So I love the cane. For a while he wouldn’t go out with it. I was like, “You have to promise me you’re going to use it!”

E.J.: My maternal grandfather had CHM, but he never used a cane. He and my grandmother lied to their kids and didn’t admit he was going blind for years. There are some crazy stories—he fell down a manhole once.

Deborah Ann: The year after E.J. moved to Chicago, we went to a CHM conference together. Women who’d been with their husbands for 20 years talked about the strategies they’d developed. One woman told her husband what food was on his plate according to the numbers on a clock face. And it hit me: One day E.J. won’t even know what food is in front of him. Those little details are going to be my responsibility. I’m a pretty strong chica, and I can handle a lot, but it made me feel tired. I remember coming home and saying, “I never want to be resentful or angry about this. Let’s be open about everything.” I never want him to feel like my kid or anything other than an equal partner.

E.J.: I lived in Chicago for three years, and we never went more than a few weeks without seeing each other. When I moved back to L.A. in 2011, we moved in together.

Deborah Ann: We wanted to be near the grocery store, bank—

E.J.: And restaurants, so I could walk and wouldn’t have to drive. I hired someone to help me run errands.

Deborah Ann: Decorating the house was hard. I always imagined my life with sunlight streaming through the windows, but we keep our windows shaded and the lights on dimmers because of his light sensitivity.

E.J.: Right now my vision is like looking through a paper-towel tube. If I look at Deborah’s eyes, I can see her face. But if she puts her hands out, I can’t see them.

Deborah Ann: He sees about 15 degrees out from the center of his vision—normal people see 180. When we met, E.J. could see when someone passed him a drink. Now it’s out of his sight line.

E.J.: I wear two pairs of sunglasses outside, one on top of the other, to block sunlight. And I’m not afraid to ask for help.

Deborah Ann: I’ve had to learn when he needs me and when he doesn’t. For a while I apologized for every crack he tripped over. Finally he said, “It’s not your fault. I’m going to walk into things.” But we are conspicuous. When E.J. gets off an escalator, he stops to get his bearings and people get log-jammed. I’veseen them say, “Ugh, why is that person standing there?” I’ve had to get used to saying, “It’s OK, people are going to look.”

E.J.: We talk a lot about that stuff, like my feeling like a burden on her. Or being nervous about the future or having children.

Deborah Ann: The vision loss is different for everyone. His grandfather went blind in his midforties. That’s our basis for E.J.—about 10 years. I didn’t grow up imagining my wedding day, so we may not get married, but we’re committed for life, and we want kids. (I could wait, but his biological clock is ticking!) If we have a boy, he won’t have the disease [because it’s linked to the X chromosome]. If we have a daughter, she will be a carrier but most likely won’t have severe symptoms. If she has boys, there’s a 50-50 chance they’ll have it. Our children can be healthy and happy with CHM. E.J. is. Still, when I think of him not seeing our kids, as they grow—

E.J.: And I’d like to see Deborah Ann’s face every day. So I try to soak up as much of her as I can. I could describe her to a police sketch artist. Her great skin, her silky hair.

Deborah Ann: It’s hard to prepare for the emotional impact of losing this part of how we interact with the world. I don’t want him to feel like he’s less of a person when that happens—that his life is over. I’m not as afraid of [the blindness] literally happening as I am of it sort of happening in his heart. Also, we want to fight this disease and find a cure—but I worry that, when E.J. actually does go blind, the fact that we’ve been fighting so hard to stop it might make it feel even more devastating.

E.J.: I don’t know what I’ll be like if and when it happens. But I encourage therapy—I think we can all benefit from it.

Deborah Ann: For now, E.J.’s got a bucket list we’re working through. We did the Grand Canyon on the way to Chicago. We did Europe. He was an extra on True Blood this season, and the cast has been really supportive, donating things for us to auction off on eBay to raise money for research.

E.J.: It’s horrible to think about not seeing TV, comic books, and movies if I go blind. I know I’ll miss that stuff a lot.

Deborah Ann: There will be projects I do that he’ll never see. It’s the small things that get me—reminders of how different our life is going to be, having to decline picnics with friends. When I get upset, E.J. hugs me and says, “It’ll be OK—we love each other, and we’ll get through this.” This disease has brought out incredible parts of E.J.’s personality. He ran 12 marathons last year to raise research money!

E.J.: I blindfolded myself. I wanted to see what my future could be like—what it was like to be with thousands of people while I was blindfolded. The experience was amazing.

Deborah Ann: He is a hero. My favorite part of E.J. is his spirit, and our connection. Yes, things have been hard, but I’ve always known he was the guy I’m supposed to be with.


The documentary about EJ, Running Blind, premiered at Mountainfilm in Telluride, Colorado.

For more information about the CRF visit curechm.org.