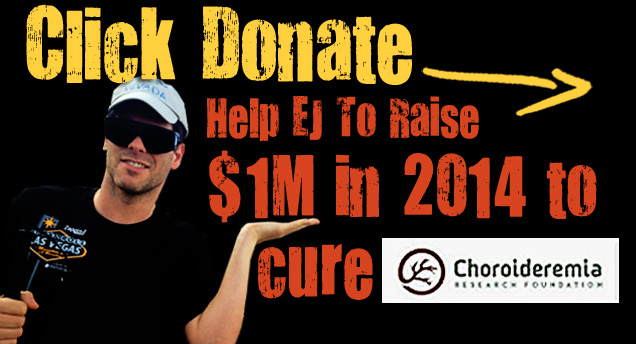 The Choroideremia Research Foundatoin, (CRF) has never raised $1 Million Dollars ever in a single year. Id like us to change that in 2014. But I need your help!! Only a couple dozen people actively fundraise for the CRF (to my knowledge). The most I’ve ever heard the CRF has made is $500,000 in a year. If we can get twice as many people to help fundraise this is a very realistic goal.

ANYTHING CAN BE AN IDEA!!

I’m going to look into having a countdown clock for 2014 and a money meter. It will keep track of what is raised and how much we have left to go. It would be great if the CRF can get behind me. It won’t cost the CRF any money and can only lead to good things. In the CRF newsletter they often say who is fundraising and what they raised. Ill be asking for updates like that maybe ever couple of weeks or so.

I’ll be emailing everyone in my email list and encouraging them to email everyone they know and so on. Local press would be great. National press is even greater. The more people that know about this the more awareness and money will be generated. I hope you guys will email everyone you know and encourage them to spread the word.

This can be a really great way to not only raise money but raise morale and awareness for the cause. This is a genetic disease and will continue through the generations unless its stopped. And we can stop it. But we have to work together and encourage others to help. I think this could be a very infectious year. If we reach our $1,000,000 in 2014 I bet it’ll be easier to reach every year. Feel free to contact me with questions.

The new year starts in about 5 weeks, so start thinking about it. When you’re around the Thanksgiving table, maybe you and your family can start brainstorming ideas. This can be the nest year for the CRF yet.

I hope I can count on everyone’s support. Thank you so much for your time.

Best to you and your family this holiday season.