Below is the next “Scratch the Surface” EJ Podcast. EJ has as his guest today Daredevil’s Executive Producer, Steven DeKnight.

Steven DeKnight started his career teaching English as a Second Language. A job that was suppose to last 6 months lasted 6 years. Until he finally got a break writing for MTV’s Undressed show. That helped lead to working with what would end up being a life changing experience, working for Joss Whedon on Buffy the Vampire Slayer, which was Steven’s favorite show on TV at the time. He worked on Buffy developing friendships that would last to this very day and beyond. It lead to working on such shows as Angel, then “Smallville,” “Dollhouse,” a little short lived gem called “Viva Laughlin” (a musical drama on CBS with Hugh Jackman), helping create and run “Spartacus” and now the hit Netflix/ Marvel show “Daredevil.”

Ej and Steven talk about:

It was a great time talking with Steven. He’s a great guy and has a ton of great stories.

Below is the poster EJ is raffling which Steven DeKnight signed when he met with EJ for this podcast. Click here or, on the image to learn more. 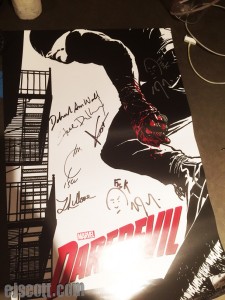