Joe MacFarland over at EBay’s Stories site, saw EJ’s latest auction and decided his story was worthy of note. So he decided to write about it on their site.

Below is a a piece of that article which you can find on ebay-stories.com.

Can you imagine slowly going blind? Immediately the mind jumps to all the things you would miss, from sunsets, to seeing the faces of your loved ones, to simply reading a good book. We take our eyesight for granted, and the prospect of losing the ability to see, forever, can be terrifying. But not to EJ Scott.

EJ Scott didn’t know he was going blind until the age of 27. Up to that point, he considered his life pretty ordinary, jumping from job to job, trying to make ends meet. He finally decided to try something new: acting. He prepared to set off for Los Angeles to pursue his dream. It was then that he learned he had a genetic condition called Choroideremia. Choroideremia is characterized by a progressive loss of vision, eventually leading to total blindness. It starts slowly and is barely noticeable, with characteristics of night blindness. Slowly the field of vision narrows (tunnel vision) and the person is not able to distinguish details. It is a rare, inherited disorder, and there is no cure.

Given the enormity of the changes one goes through during the progression of this disease, it would be no surprise for a person to feel hopeless. But not EJ Scott. Instead, he got involved, making it his mission to raise awareness about Choroideremia, and to fundraise as well. 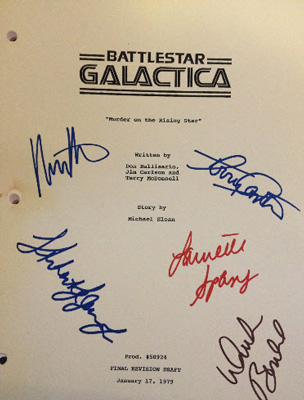 To further support his goals, EJ has been selling his stuff on eBay over the course of the last six months, raising over $8,000. He continues to sell his collection of comic books and other memorabilia. You can see all the items by clicking here.

One particular item of his caught our fancy, this SIGNED BATTLESTAR GALACTICA Script (1979) 5 Signatures – for CHARITY!!!

Check out EJ’s auction and all his other items by going here: EJ on ebay.com

Please also consider giving to EJ’s charity, The Choroideremia Foundation by donating using the button below: