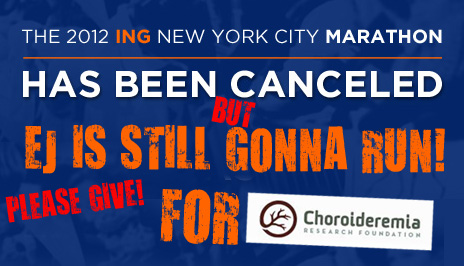 All week, New York’s Mayor Bloomberg had promised that the New York City Marathon would go on, as scheduled, even though the Big Apple had just gone through it’s worse hurricane in history. There were many who disagreed with the mayor, but even as late as this morning he was still adamant that the race would go on. So EJ Scott was in New York preparing for his race on Sunday.

However, as the day went on, the criticism continued to rise, against the Mayor’s decision.  It was widely felt, by the public, that this is not the time for a race while the region is still recovering from super storm Sandy. Therefore, tonight, Mayor Bloomberg reversed his earlier decision saying that the New York City Marathon was now canceled.

The NYC Marathon represents EJ’s 11th race of his 12 in 2012. It must have been be difficult being so close to his goal of completing twelve marathons this year to have heard such news.  However, EJ is determined to finish what he set out to do, so he has decided that for him, not running just isn’t an option. Therefore, he will run his own marathon.

EJ states below what he plans to do:

I made a promise to myself, to my charity and to my nephews who I run for that I will run 12 marathons in 12 states in 2012. I have made my commitment to the New York City marathon a long time ago and I intend on keeping my word. No doctor has told me not to run, there is no danger element to me running on Sunday. Therefore, I will run 26.2 miles blindfolded as intended. I will be guided and I will even start at my original start time of 10:55 a.m. Logistics are still being worked out. It will not be through 5 boroughs and will not end at Central Park. As of now I’m thinking of running on a bike path that circles Manhattan. Using a tracking system to make sure I do my 26.2 miles as promised. This is my 11th marathon of the year. I fully intend to finish what I’ve started.

Thank you for your support!

Running on his own, may not be easy, so let’s all support him. Anyone wishing to run with EJ, or who wants to support his efforts, he says you are “you’re welcome to do so!”

EJ needs your support more than ever now, so please give and give often, by clicking on the PayPal button below to donate to help find a cure for EJ and his family members who also suffer from the disease of Choroideremia.